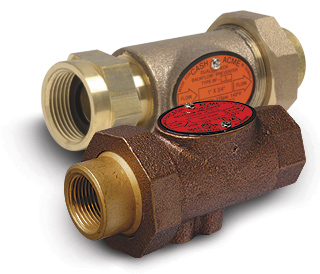 Backsiphonage can be caused by a wide variety of circumstances, for example; main breaks, flushing, pump failure, or emergency firefighting water drawdown. Backpressure can occur when heating and/or cooling, waste disposal, or industrial manufacturing systems are connected to potable water supplies and the pressure in the external system exceeds the pressure in the distribution system. In both of these situations, the direction the water is flowing changes. Instead of water flowing from the potable distribution system to the customer, the nonpotable water is flowing towards the source of the potable water. This potentially contaminated water can cause serious harm to anyone who comes into contact with it. For this reason it is important that you have a backflow prevention assembly tester perform an annual backflow test on your prevention assembly.

In past incidents of backflow, the contaminated water has caused serious illness and even death. It is believed that the number of incidents report is much lower than the total number of backflow incidents across the United States. It is important to have your annual test and if any backflow issues are occurring, immediately have backflow repair performed on your assembly. If you are in need of affordable backflow testing, Simply Backflow is here to help! We are specialists in backflow testing and repair.